If you like your New York served up grimy, and filled with an assortment of intense, oddball characters that are low on cash but high on ideas, you don’t want to miss Candy Apple, showing February 19th at 9:30 at Cinema Village as part of the 2016 Winter Film Awards, 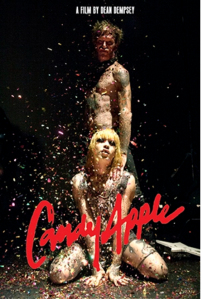 running Feb. 18th through 26th in New York City. Artist Dean Dempsey directed and stars in the movie, his first feature-length film. Here, he offers some insights about what inspired the project, and what he learned along the way.
By Carole Nicksin

For those who haven’t seen the movie yet, can you describe the plot?
It’s a dark comedy that follows a father and son as they try to survive in New York, and the undercurrents of vice and addiction that undermine their thoughts of a better life or an artistic life. How’s that? I just made it up off the top of my head.

It’s a great description! When I watched it, it made me think of Midnight Cowboy, and also Andy Warhol’s Trash, directed by Paul Morrissey.
It’s funny, I love both those films but I hadn’t connected those dots. But I have heard those references from other people who have seen the movie. I came up with this idea on a whim. I thought, wouldn’t it be great to have a film with only non-actors in it. So basically, you’d have people playing themselves in a narrative. The only one who has done any acting is the guy who eats cereal off of my character’s chest. The rest are bums I met on the street or people I met in a bar. The guy playing my character’s father is actually my father.

Okay wait, that’s your dad? The actor with tattoos all over his neck and face, a hook for an arm and a prosthesis for a leg? Yes. I worried that he would be a difficult person to work with, because he’s a come-as-you-are kind of guy. He’s made his life in this punk 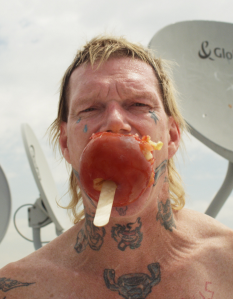 aesthetic of do-whatever-the-fuck-you-want and he’s devoted his life to music. But when we started working together, I realized he’s been performing all his life. He could look at a script and know it after one look, because he’s used to memorizing lyrics.

That is one intense dude. Tell me more.
I knew him until I was about 4, and then he and my mom, Suzie, went their separate ways. Subconsciously, I was always keeping an eye out for Trash—that’s his name—and one day I ran into him at a gas station/liquor store in Bisbee, AZ. I recognized his tattoos—he has comedy and tragedy tattoos on either side of his neck. I left, but then I turned around and went back and I said, “Do you remember Dean and Suzie?”, and he said, “Yeah, why?” And I said, “I’m Dean.” And he takes a few steps back, because he probably thought I was going to punch him! But we talked, and then not long after that I went off to college in San Francisco, so that was that. And then, shortly after that, he got hit by a train.

I thought the scenes where your character is taking acting classes, and then doing little monologues by himself, were really funny.
That was an homage to Robert DeNiro in Taxi Driver, ‘You talking to me??’. Also, I have these acting 101 books, and the exercises are ridiculous, like, “Pick up an empty box as if it weighs 100 pounds”. Why not just put something heavy in the box? You know?

You were born in 1986, but Candy Apple is kind of an homage to the Lower East Side of the 70’s and 80s.
It’s true. In a weird way, I think it will be more successful in 5 or 10 years. It’s abrasive and rough around the edges, and I don’t think people are ready for that kind of vocabulary. But it’s not an intentional homage, in that it’s all real people who are here in New York right now, and the stories in it are things that happened recently.

How much did it cost?
With post, it was around $100,000. We had about 15 people on the crew, and we shot it with Red Epic cameras. I financed it through Wendigo Productions in New York. The CEO is a friend and they wanted to make a film project.

What was the biggest obstacle?
Working with non-professionals was challenging. People would cancel the day of a shoot because they hadn’t learned the script. Finally we had to tell them just come as you are and we’ll brief you as you go. We managed to pull it together.

Is what you ended up with very different than the script?
No, it’s 95 percent the script. If there was dialogue that went somewhere interesting, I didn’t call cut, because if it travels somewhere interesting, why end it? But in certain scenes, there wasn’t specific dialogue, I’d just tell them to be sure to say A, B and C, like little triggers to carry the film forward.

What advice would you give people who want to make a film?
With films like this, it’s not a sizable budget compared to Hollywood, but it’s still a lot of money. So what I would say is, don’t focus on the money. Just do it. Write the script, get your friends together and just do it. But get the best audio you can get. As long you have good audio, you won’t lose the interest of your audience.

What are you working on now?
I’m actually writing a new feature that I’m hoping to shoot this year and I just finished a pilot that me and Greg Mania are writing, called 8 1/2 million, a dark comedy based in New York that follows a similar group of outcasts. It’s a glimpse of New York that is less glamorous and affluent than what we typically see. It’s not the New York in which everyone is white and has huge apartments. This is people doing God knows what just to make the rent!